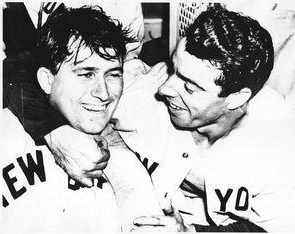 from the 3-31-15 Waterbury Republican American

It is believed that the 2015 baseball season begins in a few days, but that is just a rumor. When it stops snowing, when the thermometer hits a reading above 35 degrees, I’ll believe it.

There is one place, however, where baseball is officially on, and that is the Howard Whittemore Library in Naugatuck. It is a guarantee. You can talk baseball April 8 no matter what the meteorological calamity.

First pitch that evening is at 6:30 p.m., and four local baseball authors will talk about the national pastime and Connecticut’s place in it.

Leading off will be Michael Bielawa, author of “Bridgeport Baseball.” With Bielawa will be Douglas Malan, author of “Muzzy Field: Tales From a Forgotten Ballpark.” Also in the lineup is Bill Ryczek, a baseball historian and author of a book on the state’s football history, “Connecticut Gridiron.”

Kirk Morrison, reference librarian at the Whittemore, believes that hot stove talk is what area baseball fans need during this chilly start to spring.

“I grew up thinking of Connecticut as a contested area between Boston sports teams and those of New York,” said Morrison, a Springfield, Mass., native. “In my time here, I’ve been seeing what a rich history and contributions to the sport Connecticut has on its own, beginning way back in the 19th century with major league-level clubs and stars. I hope folks who attend will be both surprised and proud of the great teams and players that Connecticut has been host to over the years.”

Our regional sports heritage has always brought out a crowd to sports presentations, especially at the Whittemore. This will not be Harrison’s first time there as a presenter.

“I enjoy meeting people and talking about my favorite sport, baseball,” said Harrison, who has also penned “Hoops in Connecticut: The Nutmeg’s State Passion for Basketball.”

The latest version of “Connecticut Baseball” has a new design and features a photo of Waterbury native Jimmy Piersall on the back cover.

“I like to know what the fans want to talk about, and what they’d like to hear, but I tell you, I have a few Spec Shea anecdotes that I am sure they will enjoy in Naugatuck,” added Harrison, mentioning the borough’s famed star from the New York York Yankees, who was known as the Naugatuck Nugget.

Harrison will also “delve into Connecticut’s five natives who are in the Baseball Hall of Fame,” such as Waterbury’s renowned home run king, Roger Connor, and also the Hall of Famers who later made Connecticut home.

Since we are talking baseball books, I need to suggest a new title for fans of the team that once played in Brooklyn. You remember, they were called the Dodgers.

“I consider this team the best National League team in history,” Mele said. “Certainly the best of the Dodger teams. There are quotes in the book to this effect by (Carl) Erskine, (Russ) Meyer, (Johnny) Podres, and a number of writers, including Roger Kahn and Don Honig.”

There are two other themes explored by Mele.

“The racial climate in the majors was still kind of shaky, and there were several incidents involving (Jackie) Robinson and (Roy) Campanella during this season, including one in the spring about (Jim) Gilliam joining the club,” said Mele, whose work is never just a retelling of headlines, but a history enlightened through contemporary perspective.

“The Giants-Dodgers rivalry climaxed in September when Carl Furillo dove into the Giants’ dugout and got Leo Durocher in a stranglehold,” Mele added.

We just don’t have guys diving into dugouts any more.

“And there are the human stories,” he said. “The Hodges story of his slump, which carried over into the 1953 season, and the guys living in Bay Ridge and being a part of the community.

So there you go. You can spend an evening talking baseball at the Whittemore Library with local authors and also keep warm until the season starts with a book on the Dodgers of Brooklyn.

And keep that stove lit, please. 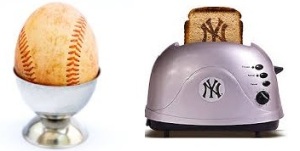 There’s a chapter breakfast and a Rock Cats game in the offing.  Here are some details in an email from Steve K:

Hi all! We had a good meeting at Quinnipiac University on Feb. 21, and after a

March hiatus, amidst the snow, and spring break, it’s time to gather again.

Let’s have a chapter breakfast on Sat, April 18, at 10 AM, at the usual Hamden

Townhouse Restaurant. Please join us for breakfast, and the usual lively

Also, we can start thinking about going to a Rock Cats game, once the weather

improves. We could do either Sat. evening June 6, or Sunday in the day, June 7.

Please let me know what you want to do, and Alan Cohen said he could procure the

Opening Day will soon be upon us! See you soon! 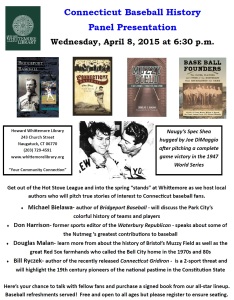 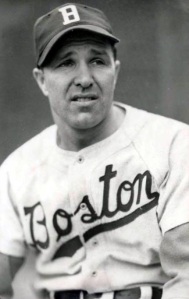 Mike Sandlock is MLB’s eldest veteran at age 99.  The Greenwich resident answered 7 Q’s this morning in a clear and gentle tone.  Mike’s first MLB at bat came while pinch hitting in 1942 at Braves Field.  He singled off the Giants’ Fiddler McGee and scored on Clyde Kluttz’s triple.  Mel Ott later homered to beat the Braves.

Mike, You singled and scored in your first at bat.  Were you nervous?

I just felt lucky to have a major league uniform, you know?  I pinch hit in that game.  That was the year that I batted 1.000.

Casey Stengel was your manager.  Did you see him as a great manager at the time?

A lot of the time he did not have a good club.  When you don’t have the horses, nothing you can do.  He was more comedian than manager.  He enjoyed managing the Braves.  He was alright to play for.

You caught for Montreal in 1947 & 1948.  Campanella and Newcombe were your team mates.   How were the black players treated?

Campy got big headed later in life with the $10 cigars, the 4 marriages, the big boat and big car and that surprised me because I didn’t see him that way when he was younger.    Don Newcombe was a helluva pitcher.  He just needed a little direction sometimes.  I tried to help these guys as I tried to help all the younger players.  If I could I would.  When Jackie Robinson came up I was in spring training with the Dodgers in Florida, and we went to Cuba, too, and there was a rhubarb and the petition, too.  But all that stuff never concerned me.  I grew up with black guys and they were good guys and good ballplayers, too.  I never had a problem.  I also played golf with Jackie Robinson and he was a good golfer.  He was a great athlete, the kind who could be good at anything.

You were behind the plate for DiMaggio’s last professional AB.  Did you speak with him?

Oh sure, that picture of me and Joe is hanging on my wall.  He hit a ground ball and I backed up first base.  When he came to bat I said “Hi, Joe” and he said “Hi” back.  Joe never talked much.  Speaking of Italians, you should read the new book about 1957.  In chapter 4 they give you every name they used to call Italians and Jews, Blacks and Polish, too.  It’s a good book.  My grandson picks these books up and sends them to me.  We all share them.

You’re Polish; who was the greatest Polish ballplayer of all time?

(Beat.)  Stan Musial, of course!  He was a helluva great player and a good catholic polish lad.  I never spoke with him.  He was in St. Louis and I was in Pittsburgh.  I would say he was the greatest.  And I had dinner with Yaz.  Yaz was a happy-go-lucky fella but he didn’t speak good Polish.  The difference between Stan and Yaz was that Stan was nice to everybody.

What memories do you have of Bulkeley Stadium and Hartford in 1940 ?

Sure I remember playing in Hartford in 1940.  I was not well-liked by the manager, never got much of a chance to play.  They shipped me to Class B.  Bulkeley was an old wooden stadium.  I think it had a short right field and a medium left field.  It was OK.  Pretty good ballpark.

As a catcher who do you rank the best ever, Berra?  Bench?  Dickey?

Oh, there have been so many good ones.  It’s pretty hard to judge that.  Dickey was my favorite because I saw him when I first saw the Yankees play.  But I guess I would have to go with Campy.  He moved really well and he was just so determined.  I knew he would make it