Join CT SABR member Paul Hensler this Saturday, Nov. 4, as he talks about his just released book, The New Boys Of Summer.  Paul examines how sweeping internal changes within Baseball in the late Sixties fused with the cultural upheaval of the time.  Copies of the book will be available for purchase.  Location:  Book Club Bookstore, 869 Sullivan Ave., South Windsor, CT.  Starts at 2 pm.  More info, contact Karl at Kcicitto@cox.net.

Mark Your Calendar for the CT SABR Holiday Luncheon on Sat., Dec. 16 at 12 PM.  We have a private room at the Baci Grill, 134 Berlin Rd., Cromwell, CT 06416.  Attendees will  enjoy a buffet of four entrees with sides & desert.  We plan to have a speaker.  $30 per person including tax and tip. Please reserve your tickets before Dec. 7 by emailing Alan Cohen at  adc0317@comcast.net   Checks should be made out to CT SABR and mailed to Alan Cohen, 7 Longlane Rd., West Hartford, CT. 06117.  Please mail your check when you make your reservation.  Speaker details to come soon.  For more info, please contact Stan at stanyank5@yahoo.com

Jackie Robinson and Joe DiMaggio were big parts of this Fall Classic, obviously, but it was the role of smaller players that took center stage.  The book traces the lives of Snuffy Stirnweiss, Cookie Lavagetto, Al Gionfriddo, Bucky Harris, Burt Shotton and Bill Bevens.  Biting poverty followed by baseball success was a constant theme for these men.  Cook writes about their upbringings as well as their lives after Baseball, sometimes fulfilling and sometimes bitter.  Bitter was the case for Bevens, who was treated as a WS failure all his post-MLB life.  Bevens often imagined how his life would have been different had Cookie not broken up his WS no-hitter with two out in the ninth.

Mr. Cook kept us very entertained.  He credited some of his successful research for the book to the families of the players who allowed him to study the family scrapbooks.  (They played in the age of scrapbooks, of course.)  The author shared delicious pearls, including the curious one that the person who could really drink all the other Yankees under the table was…Billy Martin’s mother, Joan.

Cook is the author of seven books.  His writing has appeared in the New York Times, Men’s Journal, GQ, Playboy, Smithsonian, Details, and many other publications.

Ty Waterman explored the trade of Tris Speaker from the Red Sox to the Tribe days before the start of the 1916 season.  Was it that Boston owner Joe Lanin had Tillie Walker available at a lower wage than Speaker?  Was that enough to displace a crack fielder who had batted .337 in nine years for the crimson hose?

Ty uncovered how Lanin felt pressured by the efforts of the Federal League to lure Speaker away.  Lanin increased Speaker’s salary from $9,000 in 1913 to $17,500 in 1914 and in 1915.  The pay increase would later foment Speaker’s departure.

When the Federal League collapsed in December of 1915, Lanin decided to cut expenses.  He dragged his heels to re-sign Speak for ‘16, deflecting trade rumors until he pulled the trigger in April, 1916.

The swap was a bombshell.  In the April 8, 1916 edition of the Boston Globe, Melville E. Webb wrote, “No aeroplane could have startled the little coterie of world’s champions more than Manager Carrigan’s announcement.”

Ty documented the Federal League enticement, Lanin’s subsequent “generosity” and the other events that led to Speaker’s departure, through newspaper accounts in the Boston papers.

(Note:  I used payroll info from BB Ref to summarize here, which may vary a smidge from those Ty found in the papers.)

Paul Hensler spoke about his new book, The New Boys of Summer: Baseball’s Radical Transformation in the Late Sixties.  Paul set the stage for the 1969 season against a background of expansion, a new Commissioner, and rule changes.  Those big internal factors were enjoined by external ones: racial tension, political upheaval and cultural change.  Throw baseball’s suddenly confrontational labor situation in and you have a volatile combination.

Paul said that racial conflict was one of the more compelling themes.  These times saw the first bi-racial roommate assignments with Curt Blefary and Don Wilson sharing a room on the road.  The times also saw the trading of ‘uppity” Dick Allen, with many people taking issue with this “troublemaker.”  Meanwhile, rioting and arson scarred African American urban neighborhoods.

Paul described how MLB owners and players reacted to the MLK and RFK assassinations in disjointed and shocking ways.  Walter O’Malley, owner of the team that broke the color line, was firm in his decision NOT to delay the Dodgers’ 1968 opener, which was played 6 days after King was killed.  He did so despite LA being convulsed in rioting.

Paul touched on the rise of TV, improved broadcasting, the Centennial celebration, the 1969 Mets, the coming of Earl Weaver, multi-purpose stadiums that became purposeless, and other people and events that made the end of the ‘60’s a uniquely embattled time in baseball history.

Michael Bimante and Jordan Leite, two fellows who grew up playing MLB Showdown as high schoolers in East Haven, introduced us to Clutch Baseball.  It’s a fascinating board game that adds salary, stadium factors and clutch ratings to the play.

In addition to player cards that are mathematically grounded in performance probability, these 27-year-old creators of Clutch Baseball included a design element of FUN that is absent in Strat-O-Matic and other sim games.  That is why, e.g., they creatively named some of their strategy cards “Back, Back, Back!”, “Instant Replay”, “Web Gem” and “Bush League.”

Just as interesting was their description of the evolution of their game in phases, starting by giving it away for free to going pro when securing $16,365 in seed money on www.indiegogo.com this past March.

Along their 5 year journey to profitability they learned the do’s and don’ts of license violations, receiving one cease-and-desist from MLB, but adapting to the rules as they went forward.

–The deadline for the January issue of The Wood Pile is Dec. 15.

–For the Bagwell book, writers are needed for concise histories of Palmer Field and McKenna Field.

–The NYY-BOS Rivalry Exhibit at the Mattatuck Museum in Waterbury runs through Nov. 12.  It is considered outstanding.

–The next chapter breakfast will be held on a November date TBA and could be located in the Quinnipiac cafeteria. Details are to come.

–Chapter leaders are beginning to plan now for the Holiday Luncheon in December, which will include presenters.

Any Q’s or comments, please email Karl at kcicitto@cox.net. 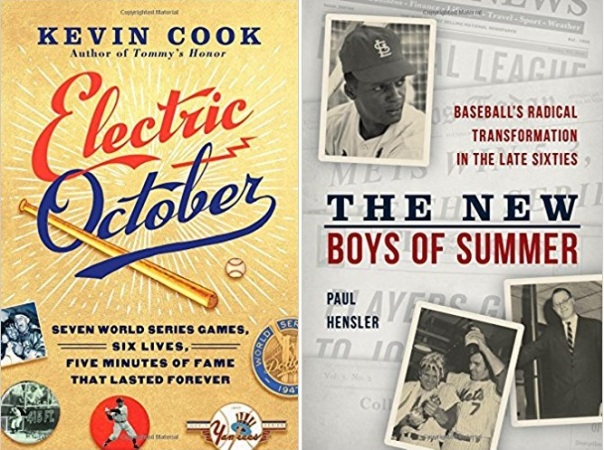 A great line up of speakers is in place for the Oct. 21 General Meeting at Quinnipiac University and here are the details:

Paul Hensler, author of The New Boys of Summer: Baseball’s Radical Transformation in the Late Sixties.  Hensler carefully examines how domestic racial issues, the war in Vietnam, assassinations of prominent public figures, youthful rebellion, and drug use each placed their imprint on the game just as baseball was about to celebrate its centennial season.

Ty Waterman on Tris Speaker.  If you know Ty then you know he is an author, a singer in the New Royal Rooters, a raconteur and a performer.  Multi-talented Ty will present on Ty Cobb’s rival for best CF in the Deadball era, The Grey Eagle.

Mickey the Lip Tangel will appear in character as Lipman Pike, “the first great Jewish Baseball Player”, according to SABR’s Robert Schaefer.  The smallish Lip packed a wallop.  He once hit 5 consecutive dingers for the Athletics against the Alerts in 1866.   (Final score, A’s win 67-25.)

Jordan Leite of Clutch Baseball.  Jordan is the co-inventor of a new board game that lets managers create a team with current players based on a set salary cap, choosing strategy cards that will solidify their strengths, and selecting the stadium that will give them a tough-to-beat home field advantage.  Boardgamegeek.com rates Clutch BB as Very Good, and recommends.

There will be a Book Sale and Refreshments.

From Hartford, Boston, and Upper New England
Take I-91 South to Exit 10 (Route 40). Follow Route 40 approximately 3 miles to its end (at Whitney Avenue). Turn right onto Whitney Avenue (Route 10) and proceed north for 1.4 miles. Turn right onto Mount Carmel Avenue and then make a right onto New Rd.  After one-quarter mile, the New Rd. campus entrance is on your left.  After passing through the guard house, take your first right into the Pine Grotto and then take another right.  The College of Arts & Sciences in on the right.

From New York City and west
Take I-95 to New Haven. Then take I-91 North to Exit 10 (Route 40). Follow Route 40 approximately 3 miles to its end (at Whitney Avenue). Turn right onto Whitney Avenue (Route 10) and proceed north for 1.4 miles. Turn right onto Mount Carmel Avenue and then take a right onto New Rd.  After one-quarter mile, the New Rd. campus entrance is on your left.  After passing through the guard house, take your first right into the Pine Grotto and then take another right.  The College of Arts & Sciences in on the right.